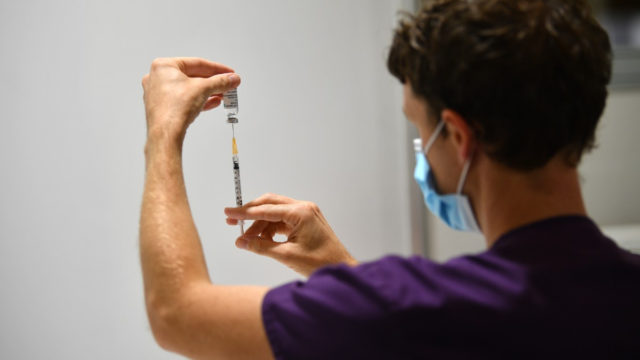 Soon Australia will be producing more than one million AstraZeneca vaccines a week, each destined for an upper arm across the country.

Fresh concerns have been raised about this particular vaccine, after blood clots were reported in some recipients.

But health experts have told TND these are extremely rare cases – and the vaccine side effects are nowhere near as dangerous as the virus itself.

And the data backs those comments.

AusVaxSafety has been monitoring the safety of the vaccines, surveying people three days after they have had their COVID-19 jab.

The latest report shows that of those who get the AstraZeneca vaccine, half have a chance of developing mild side effects.

From the more than 400,000 people who have had the AstraZeneca jab in Australia, 57,200 people reported to AusVaxSafety and of those, 37,000 said they had one or more symptoms.

Of the people who reported one or more adverse effects, the most common were fatigue, injection site pain, body aches and headache.

The results mirror those of the Pfizer vaccine.

AusVaxSafety said these symptoms were normal after any vaccination.

“They are generally mild and short-lived,” the report said.

“As with any adverse event reports, not all symptoms reported may be caused by the vaccine; they may be coincidental and due to other causes.

“These expected adverse events are related to the immune response to vaccination and are expected to resolve within one to three days after vaccination.”

The Therapeutic Goods Administration has backed this up, saying the side effects usually started within 24 hours of the vaccination and will last for one to two days.

What’s up with the blood clots?

During testing, the AstraZeneca was administered to tens of thousands of people, who were then monitored in comparison to people given a placebo.

At that stage there were no instances of blood clots, but now they’ve emerged in some countries – including Australia.

“It is becoming more and more difficult to affirm that there isn’t a cause-and-effect relationship between AstraZeneca vaccines and the very rare cases of blood clots associated with a low level of platelets,” Mr Cavaleri said.

Experts are cautioning against panic, saying the risk of getting a blood clot from the vaccine is wildly overshadowed by the risk of dying from COVID-19.

Paul Monagle, pediatric haematologist at the University of Melbourne, is studying the clots. He said we need to remember how rare they are.

In the UK, more than 18 million doses of AstraZeneca were administered before March 24 and in that timeframe, only 30 cases of blood clotting had been identified.

Of the more than 400,000 doses in Australia, only one case has appeared – a 44-year-old Melbourne man, who is being treated  in hospital.

“There is very little we do in medicine that doesn’t have some potential for side effects,” Professor Monagle said.

“At the end of the day, yes the vaccine seems to have a small risk associated with it, but the risk of COVID-19 is much bigger.”

Realistically, AstraZeneca is the best shot Australia has at herd immunity, Professor Sharon Lewin from the Doherty Institute said.

“In Australia, we’re in a position where we don’t have COVID-19, but we are in a precarious situation where very few have been vaccinated,” Professor Lewin said.

“So we need to continue the rollout and acknowledge there may be a very small risk. Initial reports are saying if you pick it early and treat it, you can avoid serious illness.”

A high degree of awareness among Australians and their healthcare professionals is integral to continuing the rollout, she said.

“We need the vaccination to return to normal and open up borders. With winter coming there is more impetus to roll out it out quickly,” Professor Lewin said.

The post You’ll likely get the AstraZeneca vaccine – these are the possible side effects appeared first on The New Daily.