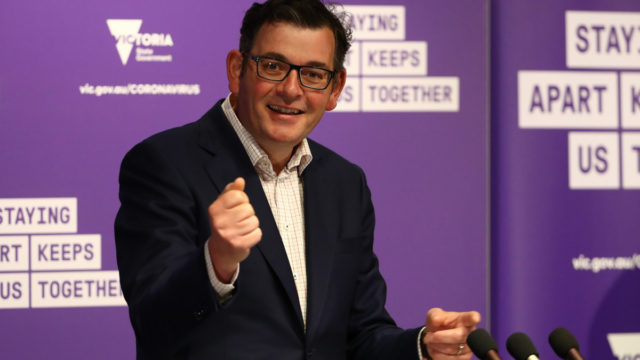 “I will not see you tomorrow.”

With those six words, Victorian Premier Daniel Andrews finally signalled an end to his marathon run of fronting daily media briefings that has been a landmark of the state’s fight against the second wave.

After 120 days of stepping up to the microphone each day to announce new COVID details – running the full gamut from horrifying to uplifting – Mr Andrews will finally take a day off on Saturday.

On Friday, he spent hour on the podium, well short of his own personal pandemic PB, but still in keeping with his long-running theme of answering questions until journalists’ had no more.

At the height of Victoria’s outbreak, Mr Andrews’ daily briefings were also must-watch TV for millions, in the state and outside it.

His personal media marathon began on July 3 – 120 days before. Victoria had just recorded 66 new coronavirus infections and he was about to announce local local lockdowns for 10 Melbourne postcodes.

Within weeks that had become the entire city, and then the state. Case numbers peaked at 725 on August 5 and the virus death toll climbed heartbreakingly until it topped 800.

His stamina didn’t go unnoticed, or unquestioned. In mid-August, Melbourne emergency physician Stephen Parnis tweeted his recommendation that the Premier take a day off.

Asked about Dr Parnis’ comments at – where else? – that day’s briefing, Mr Andrews said: “I’ll be really clear with you: I won’t ask people to work harder than I do.

“I’ll be here until this is done. Because that’s an important part of the job that I have.

Melbourne eventually began emerging from its 16-week lockdown only this week – posting two days without any new COVID infections and then days in the low single digits.

“We all have to play our part to protect it, to safeguard it and to make sure that we don’t have to take any backward steps.”

Victoria had four more virus cases on Friday, all in Melbourne. Two are “low positive results” that are still being investigated.

The others are under investigation to see if they are linked to known outbreaks. One of those patients has been to the Deer Park area in Melbourne’s west, and people there are urged to monitor for symptoms and get tested for the virus.

“I will not see you tomorrow,” Mr Andrews said at the end of Friday’s briefing.

“The Minister for Health will conduct the daily briefing and I’m sure you’re all very pleased to hear that news.”

At this stage, it’s not certain whether the Premier intends to take the whole weekend off or will return to the podium again on Sunday.

The post ‘Will not see you tomorrow’: Dan Andrews signs off after a marathon 120 briefings appeared first on The New Daily.