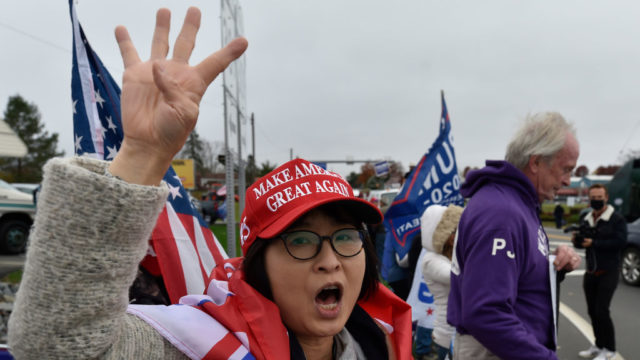 Everything’s bigger in Texas, so they say.

It’s the second most populous state in the United States, and has a staggering 38 electoral votes – second only to California.

So yes, Texas is a big deal.

It’s the crown jewel of Republicans, who have won the famously conservative state in every presidential election since 1976.

But this year, US President Donald Trump and Democratic leader Joe Biden are polling neck and neck.

And there’s a rapidly growing group of voters who threaten to turn the red state into a purple swing state, with a more equal distribution of Republican and Democrat voters – Asian Americans.

About five per cent of the Texan population identify as Asian, according to the 2018 US Census Bureau.

While that number is small – some 1.45 million people out of 29 million – they are the fastest-growing ethnic group in the state.

And their diverse histories and cultural backgrounds make them a force to be reckoned with.

“You’ve got the South Asians who lean more Democrat, then the Vietnamese who lean toward Republican,” said Lan Trinh, a New York journalist and refugee from the Vietnam War.

“A lot of where they come from – the baggage they bring, their history – impacts the way they experience America, and how they assimilate and how they vote.”

But Ms Trinh said this presidential election was different from the rest.

“I call Texas the wild card of this election because so much has changed in that state in the last decade,” she said.

“I’d say it’s not just about Democrats and Republicans, it’s really about: Are you for Trump, or not for Trump?

“I know quite a few people who voted for him who are hardcore Republicans, hoping he would ‘drain the swamp’ or whatever you want to call it and basically give a fresh perspective to governing.

“But a lot of those people now, four years later, are like ‘No, we’ve seen what he’s done now’.”

However, she said the one election issue they could all agree on was education.

“Asians will move anywhere, any suburb, so their kids can get a good education,” she said.

“Texas is a very unique place for this election because it’s a battleground state. Because Texas is so massive, the logic is that if you’ve got California and New York – both blue states obviously – then if Biden can win Texas, it’s done.”

But the President has a trump card: Vietnamese Texans.

“Trump has really played up Biden being a socialist, so that taps into a very deep fear,” Ms Trinh said.

“The communists put my family in jail for trying to flee Vietnam when I was a six-year-old kid – what government does that, locks up a child? – and my mother nearly died in prison.

“Because of that fear of communism, for a big sector of the Vietnamese population that fled, there is a very deep fear.”

Her big wish for Asian-Americans?

“I’m really hoping – praying – that as an Asian-American, I hope that Asians are going to go out and vote in mass, because it’s so important this election, and they could really make a huge difference if they all come out,” she said.

“I can’t wait. I’m going to be staying up all night to watch it.”

You can watch Lan Trinh’s investigation on SBS Dateline at 9.30pm on Tuesday.

The post Why Asian-American voters are the wildcard that could swing the US Election appeared first on The New Daily.