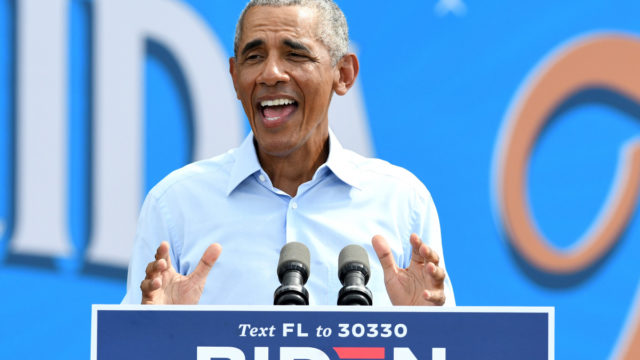 Barack Obama has accused US President Donald Trump of being jealous of the media coverage the coronavirus has received.

Speaking in Florida as he campaigned for Joe Biden ahead of the November 3 election, the former president hit out at Mr Trump for his handling of the coronavirus pandemic.

“More than 225,000 people in this country are dead. More than 100,000 small businesses have closed. Half a million jobs are gone in Florida alone. Think about that,” Mr Obama said.

He continued: “And what’s his closing argument? That people are too focused on COVID. He said this at one of his rallies. COVID, COVID, COVID, he’s complaining. He’s jealous of COVID’s media coverage. If he had been focused on COVID from the beginning, cases wouldn’t be reaching new record highs across the country this week.”

Obama: ’[Trump] is jealous of COVID’s media coverage! If he had been focused on COVID from the beginning, cases wouldn’t be reaching new record highs across the country this week … Winter is coming. They’re waving the white flag of surrender’ pic.twitter.com/Iz2G8WCtFw

Those words elicited a tart response from Mr Trump, who said Mr Obama was drawing “very small numbers” in contrast to his own rallies that were drawing “tens of thousands of people”.

Obama is drawing VERY small (tiny) numbers of people. Biden is drawing almost no one. We are drawing tens of thousands of people. You’ll see that again today. The Great Red Wave is coming!!!

Mr Trump was campaigning in Omaha, Nebraska when he lamented what he sees as the media’s obsession with the coronavirus pandemic.

“You notice the fake news now, right? All they talk about is Covid, Covid, Covid. Covid, Covid, and we’ve made such progress, it’s incredible,” Trump claims, as the US sets records for most single-day new cases pic.twitter.com/13w8CvpUB1

Record numbers of new US COVID-19 cases in recent days have offered Mr Biden’s campaign a chance to remind voters of how Mr Trump and his allies have played down the advice of public health experts to wear masks and observe social-distancing guidelines to battle the pandemic.

Despite his exposure to the coronavirus, Vice-President Mike Pence has continued to campaign and will travel to North Carolina and South Carolina on Tuesday. He tested negative for the virus on Monday.

Big day on the campaign trail

With just a week to go until the election, Mr Trump and Mr Biden embarked on an intense day of campaigning.

More than 64 million votes have been cast so far, approaching half the total 2016 vote, according to the US Elections Project at the University of Florida.

The huge volume of mail ballots could take days or weeks to tally, experts have said. Mail voting is nothing new for the United States – about one in four ballots were cast that way in 2016 – but is surging amid the pandemic.

Mr Trump, who has repeatedly and without evidence claimed that mailed ballots are likely to be subject to fraud, on Monday  (local time) said on Twitter: “Must have final total on November 3rd.”

Mr Biden’s foray into Georgia, long a Republican stronghold, is a sign of the campaign’s optimism heading into the final week.

Polls show the race there to be tight, and a win by Mr Biden in Georgia would likely be a severe blow to Mr Trump’s chances. The state hasn’t supported a Democrat in a presidential election since 1992.

Mr Biden told reporters on Monday he believes he has a “fighting chance” to take Georgia.

He will hold an afternoon event in Warm Springs, Georgia before capping the day with an evening rally in the state capital, Atlanta.

Flush with cash, Mr Biden’s campaign has been advertising in the state for weeks.

Mr Obama, who has emerged as a top stand-in for Mr Biden, campaigned in Orlando after heading up a rally in Miami over the weekend. Mr Biden served as Mr Obama’s vice president for eight years.

Mr Trump’s rally in Nebraska, meanwhile, suggests his campaign is preparing for a close finish.

The state apportions three of its five electoral votes by majority vote in its three congressional districts, with the Omaha-area district a potential pick-up opportunity for Biden while the rest of the state is expected to go for Trump.

In a scenario where Mr Trump and Mr Biden finish close to a tie in the US Electoral College, that Omaha district with its single vote could make the difference of clinching the 270th elector needed to win.

Early on Tuesday, Mr Trump will staged rallies in Michigan and Wisconsin, two states he won by narrow margins in 2016, but where polls show him now trailing to Mr Biden.

Mr Trump was able to tout the confirmation of his nominee Amy Coney Barrett to the US Supreme Court.

Shortly before Ms Barrett’s confirmation, the Supreme Court refused to allow an extension ordered by a federal judge in the deadline for returning mail-in ballots in Wisconsin, dealing a setback to Democrats.

The decision came as Mr Trump again questioned the integrity of the US election again, saying it would be inappropriate to take extra time to count the tens of millions of ballots cast by mail.

Americans are rushing to cast ballots in record numbers as they look to avoid exposure to coronavirus.

The huge volume of mail ballots – more than 46 million have already been cast – could take days or weeks to tally, experts say, meaning a winner might not be declared the night of November 3, when polls close.

“It would be very, very proper and very nice if a winner were declared on November 3, instead of counting ballots for two weeks, which is totally inappropriate and I don’t believe that that’s by our laws,” Mr Trump told reporters at the White House before leaving for his campaign rallies.

Mr Trump has repeatedly and without evidence suggested that an increase in mail voting will lead to an increase in fraud, although election experts say that is rare in US elections.

Mail voting is a long-standing feature of American elections and about one in four ballots were cast that way in 2016.

Democratic officials, activists and voters have voiced deep anxieties that Mr Trump will not accept the outcome if he loses. Mr Biden has called it his biggest fear.

LeBron James, Anthony Davis Out For Wednesday’s Game Against Rockets