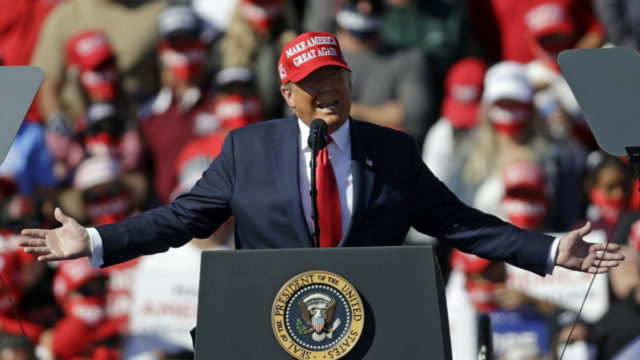 A coronavirus vaccine is “coming soon”, promised US President Donald Trump to crowds at a rally in Arizona. Except, it isn’t.

“If I weren’t President, if you had Sleepy Joe as your president, it would have taken you four years to have a vaccine,” he said on Wednesday, as coronavirus cases continued to surge across the nation.

“You would have never had a vaccine.”

Earlier, he claimed one could be “weeks away” and that the United States had “turned the corner” in the coronavirus pandemic.

But unless Mr Trump knows something scientists don’t, it’s extremely unlikely a widely available coronavirus vaccine is weeks away.

So how far off is a vaccine, if we get one at all?

So far, trials have shown that several potential vaccines can produce an immune response to COVID-19.

To do this, they train our bodies to make antibodies, which prevent the coronavirus’s spike protein from invading our cells, and T-cells, which destroy cells that become infected.

But is the immune response enough to protect us from infection?

That’s what we’re waiting to find out.

There are now 11 vaccines around the world in the final stage of testing.

The leading contenders are:

This week, AstraZeneca confirmed that early trials of the Oxford University vaccine had been producing an immune response in older adults – the most vulnerable to COVID – as well as the young.

The phase 2 trials have shown that people over the age of 56 – and even some over 70 – produced the same sort of antibody response as younger volunteers.

AstraZeneca said it hoped the vaccine may be ready for limited use within the coming months, though most experts think the vaccine will not be widely available until the middle of 2021.

And some of them don’t even require an injection.

The nasal drops contain antibodies produced from chicken eggs, which could provide immediate immunity to the virus for up to four hours, researchers say.

Out of all of these vaccine trials, surely one of them will work, right?

The final stage of testing is also the point where many experimental vaccines fail.

Even if a potential vaccine proves successful, there comes the challenge of organising a global rollout.

We need to produce enough vaccine for billions of doses, and safety regulators must sign off on the vaccine before it can be administered.

Then, we need to immunise the world’s entire population – a logistical hardship made increasingly difficult by vaccine scepticism and the proliferation of baseless conspiracy theories.

At this stage, we’ll be waiting until at least 2021 to get the jab.

The post Donald Trump says COVID-19 vaccine ‘coming soon’, but not as soon as hoped appeared first on The New Daily.