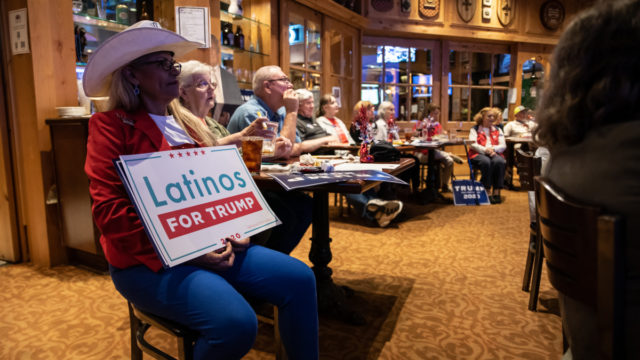 So many votes, so many questions.

So far more than 65 million Americans have already cast their ballots in the presidential election, a staggering number without precedent in any prior election. In some states, early voting tallies could surpass the total state count from the 2016 race before the polls open on Election day, Nov. 3

But the votes won’t be counted until Election Night (or even later in some states). For now they remain silent, like wrapped presents under the Christmas tree, there to be lifted up and shaken by nervous operatives and journalists for signs of what’s inside.

The tree with the biggest pile underneath so far is Texas, with more than 7.3 million votes cast as of Tuesday.

Texas has been a safe Republican state for decades. It has two GOP Senators, a GOP state legislature and hasn’t voted Democratic in a Presidential race since 1976. It’s also a major prize in the electoral college, second only to California, with 38 electoral votes (it takes 270 to win).

Democrats believe the astonishing early vote is a sign of the state’s shifting demographics in their favor, with a steadily increasing Latino, Asian and Black influx into its huge suburbs around Dallas, Houston and other cities. The effect of that population shift was first glimpsed In 2018, when the charismatic Democrat Beto O’Rourke – who briefly ran for president this time around – nearly knocked off Ted Cruz in a Senate Race.

Polls show Trump with a 3 to 5 point lead in the state – within the margin of error. Most analysts think a Texas win for Biden remains unlikely, unless it’s part of an epic nationwide landslide that sweeps away not only Trump but GOP control of the Senate.

Democrats can glimpse that landslide, but are loathe to claim victory early, no matter what nationwide polls say. The PTSD from Hillary Clinton’s loss is vivid, and the swagger of Trump’s campaign stops around the country these past few days makes many worry he knows something they don’t.

But according to the New York Times, “Democrats appear much more eager about early voting. In the five battleground states that report party registration, nearly two million more registered Democrats have voted than Republicans so far.”

While Texans’s party affiliations remain secret, it’s clear that nationwide Democrats are turning out in substantial numbers, both with mail-in ballots and in-person early voting. According to the Times analysis, Biden has tallied 24 million likely votes, compared to just 9 million for Trump.

So Is Texas’s staggering early vote part of that blue wave, or are its GOP partisans coming out for Trump?

Nothing is certain, but consider this: Trump’s 2016 win in Texas was with a relatively low vote count. Faced with his dwindling poll numbers in the state, the surge of new voters and memories of O’Rourke’s near-win, it would take a leap of faith to think Texas’s huge turnout is somehow good news for Trump.

Whatever the idiosyncrasies of Texas, it’s inevitable to see these massive numbers as a seismic Democratic shift. No, nothing is stopping Trump supporters from voting early, but in light of his systematic trashing of the early voting, why should we expect their numbers to be high?

Texas may not be a true battleground state in this election, but it will be in subsequent races. It is a glimpse of the changing face of America, and it will be a place the parties will fight over for decades.

But for now, we can only shake the presents under the tree and wonder. The wrapping comes off Tuesday.

Larry Hackett is the former editor-in-chief of People magazine, and a contributor to the US morning television news program Good Morning America

The post Larry Hackett: Is Trump toast in Texas? So many votes, so many questions appeared first on The New Daily.