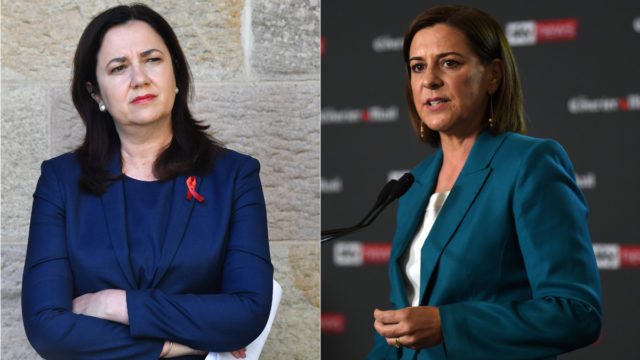 Labor Premier Annastacia Palaszczuk looks set to be returned as Queensland leader, but polls are suggesting it will be tightly contested affair.

As Queenslanders head to the polls on Saturday. most indicators are suggesting the closest election in the state’s history.

A hung Parliament is a very real possibility, which would cast crossbench MPs as the queenmakers.

Ms Palaszczuk is taking on Liberal National Party leader Deb Frecklington in a bid to lead Queensland for another four years.

Ms Palaszczuk is aiming for a third term and could become the first woman party leader in Australian history to win three elections.

Ms Frecklington is vying to become the third female conservative elected to lead an Australian government and the second conservative voted Queensland premier in 34 years.

Ms Frecklington has cast herself as a leader who will reinvigorate the Queensland economy to make it a “powerhouse again,” while promising to crack down on crime, including a controversial proposal to introduce curfews in Townsville and Cairns.

The Labor leader has consistently drubbed her rival as preferred premier in the polls, but the major parties have been consistently neck-and-neck on a two-party preferred basis.

The government has targeted opposition seats in the state’s southeast, while the LNP wants to unseat Labor MPs in the regions and outer Brisbane.

He says crossbench MPs from Katter’s Australian Party, the Greens and One Nation could decide the form of the next government.

“What can you say? I mean there’s nothing more that can be said. It’s too close,” Dr Williams told said.

“No one could know with certainty. I mean it could be a couple hundred votes in it.”

In recent days, both Labor and LNP staffers have said they are preparing for a close result.

Leaders face off in final debate

The major parties’ leaders will face off for the final time during the election campaign at the second leaders’ debate on Friday.

Unlike the Sky News/Courier-Mail debate earlier in the week, the leaders are expected to field tougher questions.

Ms Palaszczuk was backed by 53 per cent of the audience compared to 30 per cent for Ms Frecklington and 17 per cent remaining undecided.

The Premier’s strategy then was to attack the Opposition leader over costings and she’s likely to continue that line of offence on Friday.

They would also dip into $4 billion in borrowings already made by Labor.

Opposition Treasury spokesman Tim Mander said his party’s election promises will only cost $5.05 billion over the next four years.

“We have plans that will immediately stimulate the economy and provide employment … but we also have long-term plans as well,” he said.

Ms Palaszczuk is likely to continue her attacks on the LNP costings at the debate.

However, it may not even matter with many voters having already cast their ballots.

The Electoral Commission of Queensland said 440,000 postal votes had been returned and 950,000 had cast their ballots at pre-poll centres by Thursday afternoon.

That means at least 1.39 million or 44 per cent of Queensland’s 3.3 million voters have already made their decision.

Both leaders are expected to go on a campaigning blitz over the final 48 hours before polls close.

Premier Palaszczuk is again heading to the regions on Friday afternoon.

The campaign has been defined as a referendum on COVID-19 management and border closures, the economic recovery and crime-fighting in Townsville and Cairns.

The election has been almost presidential in style with both parties pitching their leaders as figureheads.

Ms Palaszczuk has an advantage because she has led Ms Frecklington as preferred premier in the polls since the beginning of the year.

Dr Williams said there’s no overwhelming love for either Labor or the LNP in Queensland, but voters respect the current Premier more.

“There doesn’t seem to be respect across the board for Ms Frecklington,” he said.

Dr Kefford said the LNP had worked hard to present Ms Frecklington as a visionary leader with an ambitious plan.

However, that may not be enough to convince voters to change the status quo during a pandemic.

“That’s something that’s been missing in the LNP campaign and maybe it’s something that just could never actually materialise based on the feeling around the pandemic and the leadership that people perceive Palaszczuk to have shown,” he said.

Dr Williams said a problem for the LNP was that voters did not see it as the natural party of government.

The conservatives have only won two elections since 1989 in Queensland.

Voters turned to the LNP as a protest vote against Wayne Goss’s public sector reforms in 1995 and Anna Bligh’s asset sales in 2012, Dr Williams said.

“The Queensland electorate needs a reason to protest to throw a government out,” he said.

With the election looming, Ms Palaszczuk announced Queensland will reopen to all of regional NSW, but Sydney remains on the COVID-19 border blacklist after another unlinked mystery case of the virus.

Deputy Premier Steven Miles says the border will remain closed to people who travel through Victoria and 32 local government areas of Greater Sydney.

The current restrictions will be eased from 1am AEST on Tuesday.

It means Queenslanders and people who have not been in Sydney and Victoria will be able to travel in and out of the Sunshine State.

The post Minority government on the cards for Queensland appeared first on The New Daily.

Who is Ime Udoka? Four things to know about Celtics’ next head coach

Chris Paul Expected To Be Cleared To Play In Game 3

One COVID case in Victoria, ahead of rules easing