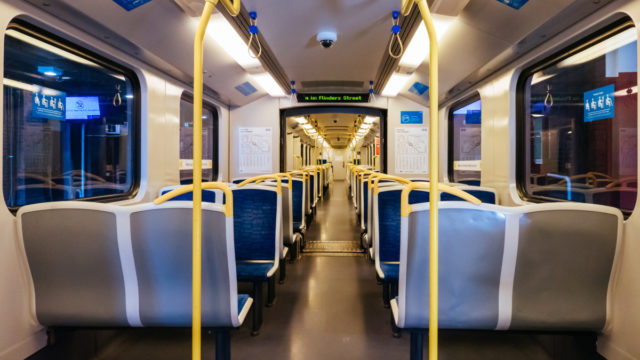 A public transport executive has been caught on a phone tap telling a cleaning company he would “cover up” for it, after it emerged it had failed to spray down a Melbourne train at the start of the state’s first coronavirus surge.

The admission is contained within a secretly recorded phone call played in public hearings before Victoria’s Independent Broad-based Anti-corruption Commission, which is probing serious misconduct claims in the state’s public transport sector.

In the call, Metro Trains fleet manager Peter Bollas, who on Wednesday confessed that he had taken up to $150,000 in corrupt cash payments, told the director of a cleaning company: “I’m not against you, I’m f—ing for you.”

At the time of the alleged corruption, Mr Bollas managed the cleaning contract at Metro Trains, which was awarded to a company called Transclean.

As part of that contract, Mr Bollas and suspended V/Line chief executive James Pinder collected multiple cash payments of up to $10,000 from the boss of the cleaning company.

The payments continued for about four years.

Mr Pinder denies any wrongdoing, and claims the men were in a secret gambling syndicate.

On Thursday, he was sacked by V/Line after being suspended in August. Transclean’s contract with the network has also been terminated.

The contracts were ramped up in March in response to the coronavirus pandemic, with the cleaning company being awarded an extra $1.3 million per month to increase its efforts.

But in a phone call lasting about 20 minutes on April 16 April, 2020, Transclean boss George Haritos complained to Mr Bollas that a train had arrived late and was not being sprayed. 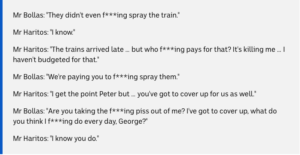 Cover-ups happened over ‘three and a half years’, inquiry told

On Thursday, under questioning from counsel assisting Peter Lawrie, Mr Bollas conceded that on one occasion cleaners did not spray the carriage at all, despite Transclean saying it had.

“How long did you feel you’d been covering up for him,” asked Mr Lawrie.

“Those last three and a half years,” Mr Bollas said.

Mr Bollas appeared visibly distressed during his evidence before the inquiry on Thursday.

IBAC commissioner Robert Redlich QC asked the fleet manager if he had any misgivings over his conduct.

“Did you not have any disquiet Mr Bollas … that you were giving advance notice to the cleaner to get his house in order … to see that COVID requirements were being met,” Mr Redlich asked.

“What I’ve done is absolutely wrong and unforgivable,” he said.

“I can’t blame Metro for what I did,” he said, when asked about the culture within the company.

On Thursday, Mr Lawrie stressed that once it became clear that some trains were not being sanitised properly at the height of the pandemic, officials took immediate steps to respond.

“I think it needs to be understood that information was acted upon in an immediately and timely fashion to bring those concerns to the attention of the appropriate authority, so that any health concern was immediately addressed,” Mr Lawrie said.

“Do you mean it was responded to in a timely way,” commissioner Redlich asked.

Here are the best jokes from the Chargers’ schedule release video, which was a side-splitting delight