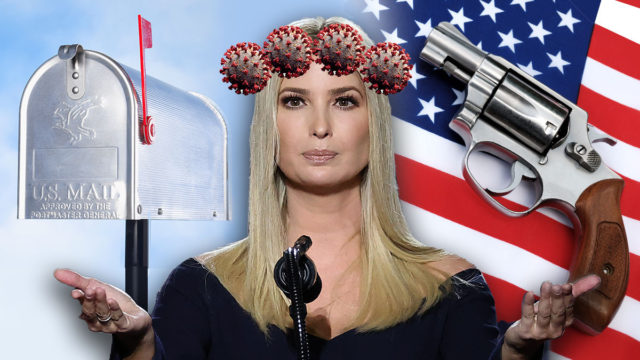 With less than a week to go before the US election, the spread of misinformation online is making it harder for Americans to decipher the truth about their presidential candidates.

A dangerous mix of half-truths and outright lies have been circulating on social media, exacerbated by one candidate more than another.

Here are some of the most recent claims, and whether they stack up.

“From the outset of the COVID-19 pandemic, the administration has taken decisive actions to engage scientists and health professionals in academia, industry, and government to understand, treat, and defeat the disease”, she wrote.

If only that were true.

Not only did Mr Trump fail to “defeat” COVID-19, but he has also consistently downplayed its severity, and, despite contracting the virus, continues to treat public health advice like face masks and social distancing as optional.

“He knew about the contagiousness of the disease and didn’t do anything,” said Kim Hoggard, a former adviser to Republican presidents Ronald Reagan and George HW Bush.

In the past week, the US recorded more daily coronavirus cases than ever before.

More than 232,000 Americans have died from the virus so far, and more than nine million have been infected.

Claim: Joe Biden was in charge of the Swine Flu pandemic and failed

It’s true that Joe Biden was Barack Obama’s vice president in 2009 when the H1N1 swine flu epidemic hit the US.

The highly contagious virus ripped across the nation, infecting more than 60 million Americans and killing at least 12,460, according to data from the Centres for Disease Control and Prevention.

“Frankly, he ran the H1N1 swine flu and it was a total disaster,” Mr Trump said of his opponent at a recent debate.

“Far less lethal, but it was a total disaster.”

But contrary to the President’s claims, Mr Biden was not in charge of the administration’s emergency health response at the time.

Joe Biden FAILED BADLY with the Swine Flu Epidemic. He knows nothing. All talk and no action!

Claim: Joe Biden has links to the Chinese Communist Party

If you ask a Trump supporter to name their favourite thing about the President, many will say he’s “tough on China”.

In one sense, that’s true.

Mr Trump has spoken out against China’s accelerating global power, moving to ban TikTok and WeChat, and issuing sanctions over its mistreatment of people in Hong Kong and Xinjiang.

He has also worked hard to paint China as America’s enemy, calling COVID-19 the “China virus” and stoking fears Chinese workers will take over American jobs.

But recently, he went a step further, accusing Mr Biden of being a  “corrupt politician” with links to the Chinese Communist Party.

Joe Biden is a corrupt politician. He wants to send YOUR jobs to China, while his family rakes in millions from the Chinese Communist Party. If Biden wins, China will OWN the USA. When we win, YOU win, Wisconsin wins, and AMERICA wins! #VOTE

This claim is false. There is no proof Mr Biden has secret dealings with Chinese officials.

Ivanka Trump, however, is a different story.

Trademark protections have been approved in categories that included toys, alcoholic beverages and foods in China.

Claim: The Democrats want to take away your guns

Republicans have been warning for decades that Democrats will try to remove weapons from gun owners.

This is partly true.

Democrats have long pushed for tighter regulations around gun ownership as a way to combat mass shootings and gun violence.

In the US, nearly 40,000 people die as a result of firearms injuries every year.

Mr Biden doesn’t want to take away everyone’s guns, but he does want to make it harder for people to get their hands on assault weapons.

Part of his plan includes buying back assault weapons and high-capacity magazines from gun owners, mandating background checks, and restricting the number of guns people can buy to prevent stockpiling.

Claim: A coronavirus vaccine is weeks away

A coronavirus vaccine is already here, if you ask Russian President Vladimir Putin.

But an effective and safe one is still months away, despite what Mr Trump says.

And that means the coronavirus is here to stay, and the future president has a mammoth task ahead of them.

The post Red, white and blue lies: The misinformation spreading across the US appeared first on The New Daily.