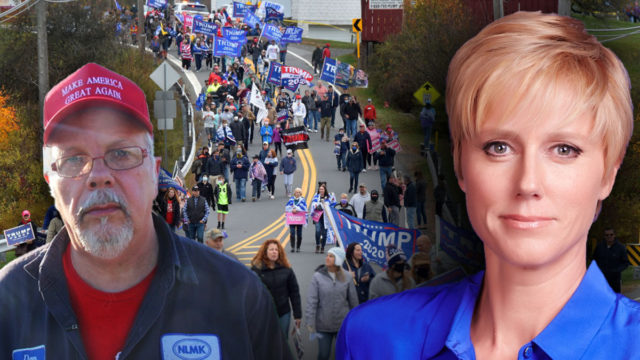 He’s been picketing the factory where he works in Western Pennsylvania with his workmates, seeking better pay and conditions.

It’s allowed him a lot of time to think.

Dan Moore is a former Democrat who voted for Barack Obama and then flipped to Donald Trump.

“[What he said] resonated with a lot of blue-collar workers,” he says.

“Finally, we have a president in the White House who’s listening and who’s willing to take action.

But he’s been wavering on who to vote for in next week’s 2020 presidential election.

In 2016, after eight years of Barack Obama, Americans swapped hope for anger.

Those who swung the election in Donald Trump’s favour, weighed down by disappointment and lacking optimism for the future, bought both his red ‘Make America Great Again’ caps and his anti-politician persona.

Putting ‘America First’, he promised to bring back their jobs and their prosperity, by rolling back free trade and immigration.

It was an isolationist strategy delivered by a straight-talking, monied New Yorker who’s far from the ‘everyman’, but it tapped into the deep malaise among America’s working classes, where the future looks bleak not bright, and where the blame is laid on cheap central American labour, cheap goods from China and the ‘elites’ in Washington.

These are the ‘forgotten people’ who voted for Donald Trump.

Through the so-called ‘flyover states’ and in Western Pennsylvania and Ohio, he has fanned that anger for political gain, and has delivered tax cuts that enabled business to employ more staff, crunched the entry of refugees and economic migrants and taken it up to China on trade.

Yet even before COVID-19 upended the world, and the election campaign, American manufacturing was still contracting.

With automation then accelerated due to the virus, many of those jobs will never return. His trade war has made Chinese importsts more expensive due to tariffs and American exports less competitive due to retaliatory action from overseas.

The country, it appears, is more divided than ever.

There are riots over race. White supremacists have been validated by the President’s use of xenophobia as a political tool. Anti-Semitic attacks are on the rise. Truth is now a nebulous term. Trust in the press has been eroded by the label ‘fake news’, not helped by the media taking sides with inflammatory and partisan commentary.

And internationally, populist, hard-right leaders like Bolsonaro in Brazil and Orban in Hungary have been enabled, while North Korea’s Kim Jong Un, validated by meetings with the US President, continues to develop his nuclear weapons program.

Back in 2016 and again in 2018 I met with farmers in Ohio, among them Tom Yuhasz, who grows corn, soybeans, wheat and peas.

Back then, he told me that while TV reporters on the cable networks were talking the President down, his support runs deep.

Four years later, his support for the President has only deepened, despite the economic recession, the mismanagement of the pandemic and the dire death toll.

He’s benefited from a Trump administration scheme that has paid out billions of dollars in aid to farmers affected by tariffs.

“The Chinese have stepped up and we’re starting to see some dividends from it,” he says from his farm in Ohio.

“The prices of beans have gone up,” he says. In many respects, that’s all that matters.

“It’s really been good for farmers. There are a few out there disgruntled but they’re not as patriotic as they should be”.

After voting for Obama, he is again casting his ballot for Donald Trump.

“I’m praying that he does [win]. He’s been the best president I’ve ever voted for”.

US polling website FiveThirtyEight has Democrat Joe Biden an 89 per cent chance of winning the election, placing Trump at just an 11 in 100 chance.

“This makes Biden the favourite, but still leaves open a narrow path to victory for Trump, for whom a re-election win would be surprising — but not utterly shocking,” FiveThirtyEight says.

After the polls were outright wrong in 2016, no one is prepared to write Donald Trump off, even though the pandemic has, for the first time, caused him to lose control of the narrative. It’s also cost him dearly among suburban women and older people who were central to his first term victory.

Former steelworker Dan Moore has made his decision.

“Looking back, I felt a connection with President Trump. I tend to get emotional at times over that,” he says.

For him, Joe Biden represents both years of establishment failures – but also fears of a lurch to the left amid working-class fears around more restrictive environmental policy and the “Green New Deal”.

Zoe Daniel was the ABC’s US Bureau Chief from 2015 -2019. Her new book ‘Trumpland; How Donald Trump changed the world” by Zoe Daniel and Roscoe Whalan will be published in 2021.