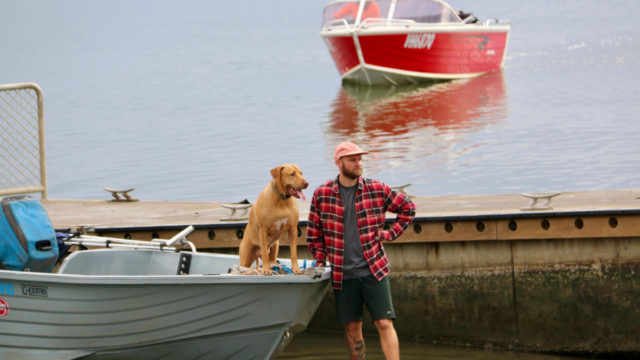 Family and friends of missing Brisbane man Trent Riley have taken to the water in Moreton Bay, as a desperate search to find the young fisherman enters its fourth day.

The 26-year-old disappeared on a solo fishing trip on Wednesday afternoon.

His empty boat was spotted doing circles near Mud Island and his hat was later found floating off St Helena Island.

Friends, relatives and community members have used boats, jet skis and kayaks to join a large-scale search of the surrounding area.

Shannon Riley said he was still holding out hope of finding his brother alive.

“This is the day we bring Trent home — I really feel he’s out there,” Mr Riley said.

“The impossible is going to happen again.”

Mr Riley said he was overwhelmed and grateful for the outpouring of support.

“This experience has brought us all together and it has made us realise that we’ve got to hang on to every moment with our loved ones.”

“I saw a post the other day that he was missing and I just thought, ‘he’s a fellow fisherman, I don’t like missing mates, I don’t like going to funerals,’” Mr Todd said.

“My plan is to follow the tide lines and look where no one is looking.”

“I’ve got everyone tracking themselves … so we can compile at the end of the day where everyone’s been.

“At the end of the day he’s out there still … I’ve got a few beers in the jet ski for when I pick him up.”

Family friend Juanita Taylor has brought food for all the volunteers.

“I wanted to get out on a boat but because I’m not young anymore I thought, if there’s some other way I could help it would be to feed breakfast to everyone,” she said.

Ms Taylor, who has known Mr Riley since he was a child, said she was impressed by the crowd that had showed up to help.

“But I wouldn’t expect anything different because Trent’s a really beautiful person and they’re a wonderful family,” she said.

Police said the air, land and sea search would continue throughout the weekend and into next week.

They urged volunteers to stay out of danger on the water.

The post Boaties take to the water as search continues for missing Brisbane fisherman Trent Riley appeared first on The New Daily.