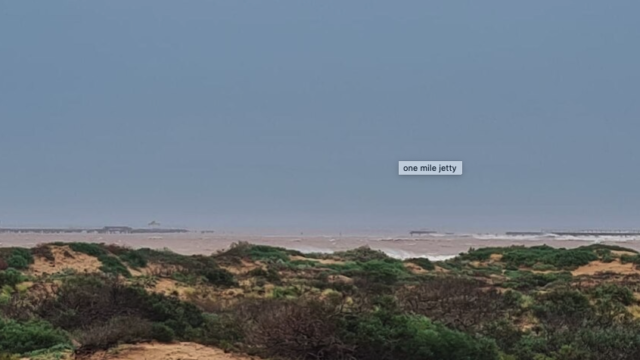 Tropical Cyclone Seroja has weakened after leaving a trail of destruction and hundreds of residents without power as it hit Western Australia’s coast overnight.

Seroja made landfall south of Kalbarri at 8pm on Sunday as a category three storm, bringing wind gusts of up to 170km/h.

It also caused significant property damage, including to the roof of Monkey Mia Resort.

Emergency services were inundated with calls for help but many were forced to stay indoors due to the dangerous conditions.

The storm weakened to a category two system as it moved inland towards Dalwallinu and has now weakened to a tropical low as it moves south-east between Merridin and Southern Cross.

There is still a red alert in place for south of Carnarvon to Lancelin, including the City of Greater Geraldton and the Shires of Chapman Valley, Irwin, Mingenew, Morawa, Northampton, Perenjori, Shark Bay and Three Springs and townsites of Coorow, Carnamah, Dalwallinu, Denham, Jurien Bay, Lancelin, Moora, Paynes Find and Wongan Hills in the Midwest Gascoyne.

Senior meteorologist Adam Morgan said the cyclone’s impact had been severe because the communities it hit were not built to withstand it.

On Sunday, Premier Mark McGowan said the cyclone was “like nothing we have seen in decades”.

The system will continue to move quickly south-east at about 65km/h over the eastern Wheatbelt, southern Goldfields and South East Coastal district on Monday morning, moving offshore of the south coast of WA in the afternoon.

The cyclone will continue to weaken during the morning but is still likely to result in damaging wind gusts, particularly to the north and east of its path.

The cyclone destroyed Carnarvon’s One Mile Jetty on Sunday, with powerful winds and tides tearing the structure apart in the middle.

The near 1.5-kilometre-long One Mile Jetty was established in 1897 for wool and livestock exports to Fremantle and is the longest jetty in the north-west of the state.

Carnarvon was the first port in the world to load livestock on board ships for transport to markets.

The jetty was also known for animal races, where entrants would race sheep along its length.

Achtung! The über-Bundestag is coming

PM pleads with premiers to reopen borders as planned