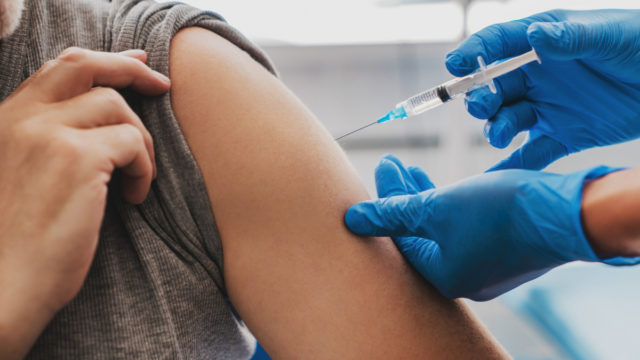 Health experts are investigating the death of a woman who developed blood clots after getting a COVID vaccine as the prime minister urged people not to jump to conclusions.

The 48-year-old woman was a diabetic and developed blood clots a day after receiving a coronavirus jab. Her death was reported by NSW health officials.

The Therapeutic Goods Association (TGA) said no confirmed link had yet been established to the vaccination but more investigations would be undertaken.

“Many conditions can arise during normal life, whether or not a vaccine is administered, but it remains important to report any new serious or unexpected events so that safety can be appropriately monitored,” the TGA said.

It has not been publicly confirmed which vaccine the woman received however the AstraZeneca jab has been linked to blood clots in rare cases.

“The blood clotting disorders being investigated in connection with the AstraZeneca vaccine are very rare and differ from common blood clots or venous thromboembolism, which occur in around 50 Australians every day,” the TGA said.

“There is a lot more to understand and learn about that issue and I would caution others in making conclusions about this at this point as well,” he told reporters near Newman in Western Australia’s Pilbara region on Thursday.

Mr Morrison said potential concerns around vaccine hesitancy meant it was important that the matter was fully investigated by medical experts.

“It’s important, because of the fact that people can have concerns, that we follow that important process, to inform ourselves properly,” he said.

A NSW Health spokesperson said the department would not speculate on individual cases, but offered condolences to the family of the woman who died.

“The death of anyone is always a tragedy and our condolences are with the family and loved ones of the person who has passed away,” the spokesperson said in a statement on Thursday night.

Australians under the age of 50 were last week warned off receiving the AstraZeneca vaccine, after a link was confirmed between the jab and rare blood clots.

Two people have developed bloods clots likely linked to their AstraZeneca jab in Australia – a woman in Western Australia and a man in Victoria, both aged in their 40s.

Prime Minister Scott Morrison has hinted that vaccinated Australians could potentially travel overseas without having to do hotel quarantine but has warned of the risks of opening Australia’s borders.

Mr Morrison said travel could initially resume for essential reasons such as business, family and medical emergencies, with people quarantining at home.

However reopening the borders could bring “1000 cases a week or more” of COVID-19 back into Australia, he warned.

“If we were to lift the borders and people to come, then you would see those cases increase and Australians would have to become used to dealing with 1,000 cases a week or more,” Mr Morrison told Nine Radio.

“Now, it is true that our most vulnerable populations would be vaccinated, but I don’t think Australians … would welcome restrictions and closures and border shutting and all of those things again.”

In a separate discussion, Mr Morrison told a community forum in Perth that he was working on the details of a travel protocol for Australians.

“What I’m working on right now, is that where an Australian is vaccinated under our program, when they will be able to travel overseas,” he told the forum.

“I would think in the initial stages, particularly for essential purposes, business, things like that, medical reasons, friends and family, important events, funerals, so on.

“That could be done and return to Australia without the need for a hotel quarantine of 14 days and to be able to do that either at home or under some other less stringent environment than you have with hotel quarantine.

“Now that would require being vaccinated and I think that would be an important incentive for people to do that.”

Mr Morrison said Australians had become used to recording days of zero community transmission but that would need to change.

He said states and territories would need to get on the same page about acceptable virus levels when travel restarts.

Australian Medical Association president Omar Khorshid said vaccinations would be the country’s way out of the health crisis.

“We don’t have COVID now, but COVID is coming,” he told ABC radio.

“We cannot keep this virus out of Australia forever unless we become a true island nation with no travel.”

While mass vaccination centres are likely to administer the Pfizer and Novavax jabs later in the year, the prime minister rejected using major hubs to give doses of AstraZeneca to over-50s.

“Herding elderly people into stadiums I don’t think is the right way to do things,” he said.

“The only successful rolling that Scott Morrison has done since he became prime minister is the rolling of Malcolm Turnbull that he did in order to secure that position,” he said.

More than 1.3 million people have been vaccinated since the program started in February with the government missing its own targets.

The post PM: Don’t jump to conclusions about woman’s death after vaccine appeared first on The New Daily.