From eager vaccine seekers to derailed light rail trains, from loud protests to sombre reflections, there was no shortage of compelling photos taken in 2021.

Here are some of the most noteworthy photos taken over the past 12 months by CBC Ottawa and Radio-Canada journalists.

© Francis Ferland/CBC Norma O’Connor, 90, gets her COVID-19 vaccine at the Albion-Heatherington CommunityCentre in early March.

© Stu Mills/CBC Ian Hadlum and guide dog Fawn practise pushing the door-opener button at a building on the grounds of Canadian Guide Dogs for the Blind. In March, the two main Canadian agencies that prepare puppies for guiding people with visual impairments said the pandemic wouldn’t prevent them from turning out well-prepareddogs.

© Andrew Lee/CBC A passenger on an OC Transpo bus looks out the window in April. While the COVID-19 pandemic has caused a drastic drop in OC Transpo ridership, transit revenues have remained in decent shape.

© Jean Delisle/CBC Ottawa imam Majed Jarrar, left, with beard, poses with his family in April. In a first-person piece, Jarrar wrote about how he tested positive for COVID-19 twice and how ‘distraught’ he was about infecting his family.

© Jean Delisle/CBC Mary Jane Richards stands on the track at the Ottawa Lions Track and Field Club. In June, Richards — an accomplished cross-country runner when she was a teen — shared her story of how she was groomed by her running coach, Peter Des Brisay, and eventually gave up the sport.

© Alexander Behne/Radio-Canada A woman uses her phone to capture scenes from a rally in downtown Ottawa in support of Palestine in May. Violence in Gaza earlier this year led to several large rallies in the nation’s capital, both by pro-Israel and pro-Palestine supporters.

© Francis Ferland/CBC Josée, a 36-year-old who doesn’t like to use her last name because it represents colonialization, dances on the Algonquins of Pikwakanagan First Nation. Josée was raised by an Irish family in Arnprior, Ont., and turned to dance to connect herself with her Algonquin heritage.

© Alexander Behne/CBC Sean Decaire ascends a rock face at the Eardley Escarpment in Luskville, Que. Decaire has used rock climbing as a way to deal with the post-traumatic stress disorder he developed after nearly being stabbed to death in 2015. 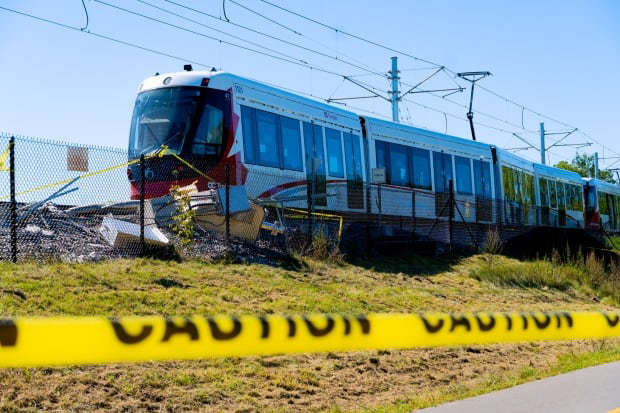 © Nicholas Cleroux/Radio-Canada Caution tape is strung up next to a derailed LRT train on Sept. 19, 2021. The derailment was the second in six weeks on the Confederation Line, and it led to the province later declaring a public inquiry into the problem-plagued light rail network.

© Trevor Pritchard/CBC A woman wearing a mask and an ‘Every Child Matters’ sweater descends a set of stairs near Confederation Park in September during the first National Day for Truth and Reconciliation.

© Jean Delisle/CBC Counter-protesters surround Chris Elston in front of Broadview Public School in October. Elston had been travelling across the country, sharing his concerns about whether transgender children can consent to hormone blockers that delay signs of puberty.

© Buntola Nou/CBC Members of the Gay Ottawa Volleyball sports league play at the Rideau Sports Centre in November. With schools closed to community groups because of the COVID-19 pandemic, the league was among several in Ottawa that had to find new venues where they could play.

© Francis Ferland/CBC Marcus Leech, president of the Canadian Centre for Experimental Radio Astronomy, gazes skyward from the group’s new 15-hectare home in Rideau Ferry, Ont. Last December, the astronomers found themselves homeless due to ‘an unfortunate confluence of both corporate and municipal politics,’ Leech says.

© Robyn Miller/CBC Flowers, stuffed animals and other mementos are left in front of a house near Westport, Ont., in December after a fatal fire claimed the life of one-year-old Samara Holmes.