Nurses in Ontario say the latest wave of COVID-19 infections has revealed long-standing problems in the profession that need to be addressed, including better pay.

“They are highly educated individuals and they want to be respected,” said Cathryn Hoy, the president of the Ontario Nurses Association (ONA).

For her, there are two parts to the compensation issue.

As the Omicron variant leaves hospitals struggling with a surge in COVID-19 patients and health-care workers, including nurses, are getting sick and suffering burnout, Hoy said one of the ways to to bring in more nurses and to retain them is to have pay parity with other essential workers like firefighters and police.

Those latter sectors are also exempt from Bill 124, passed in 2019 by the Ford government to cap salary increases at one per cent a year for public sector workers, including nurses and teachers.

“Nursing is also a female-dominated profession, and [Bill 124] speaks to a lack of respect for that profession,” said Hoy.

The CEO of the Registered Nurses’ Association of Ontario, Doris Grinspun, points to the U.S., where most nurses are making up to six figures.

“We have a problem of how the province is valuing … nurses,” she said. 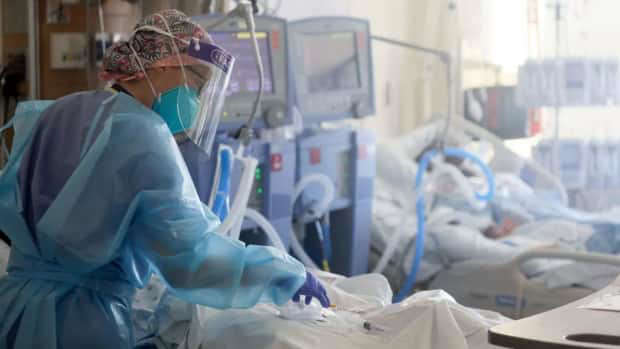 © Mario Tama/Getty Images Nurses caring for COVID-19 patients in an intensive care unit. Union heads say nurses are underpaid and undervalued and that’s why many are leaving the profession after coping with exhaustion and burnout during the pandemic.

The current pay range for a registered nurse working at an Ontario hospital is between $34.24 an hour in their first year of service to $49.02 an hour after 25 years of service.

The Ministry of Health did not say whether it would consider lifting the wage cap or paying nurses more, but in a statement spokesperson Alexandra Hilkene said: “Since the start of the pandemic, the province has added over 6,700 health care workers and staff to the system. We are working to add 6,000 more health care workers before the end of March 2022.”

Eram Chhogala, a registered nurse who works in the emergency room at two Toronto hospitals, said she knows many who are choosing to leave the profession.

“It’s getting really overwhelming,” she said, recalling a recent shift where four or five people came in suffering from COVID-19 and had to be put on life support.

Chhogala said nurses in hospitals typically work a 12-hour shift, but have recently been working as much as 16 hours because of colleagues are getting infected.

“I feel a lot of nurses have felt overworked and undervalued, and it seems the pay and treatment hasn’t matched the appreciation of what nurses do.”

To ease the staffing crunch, the province announced this week it is fast-tracking internationally-trained nurses to hospitals and allowing them to bypass lengthy licensing programs.

But Hoy is calling for a formal program. “They’re educated, and ready and willing to work,” she said.

Raisa Deber, a professor at the University of Toronto’s Institute of Health Policy, Management and Evaluation, said there is no reason not to put such a program in place.

“In Canada, it’s extremely difficult [for] foreign-trained nurses to get a licence,” she said. “You, in effect, have to go through nursing school again.”

On Thursday, the Ontario NDP and ONA released a joint statement saying they believe the province needs 22,000 more nurses.

Hoy said “nothing was done about it” for years.

“The price we’re paying is our members and our patients.”

Meanwhile, the Canadian Federation of Nurses Unions has called on governments to adopt “circuit-breaker measures” to slow down the spread of the novel coronavirus.

The federation also announced its opposition to some hospitals having health-care workers caring for patients while positive for COVID-19.

“We’re in this position because governments have ignored the nursing shortage for far too long.” said president Linda Silas.

Most Covid jab ‘side effects’ are not caused by vaccines – study