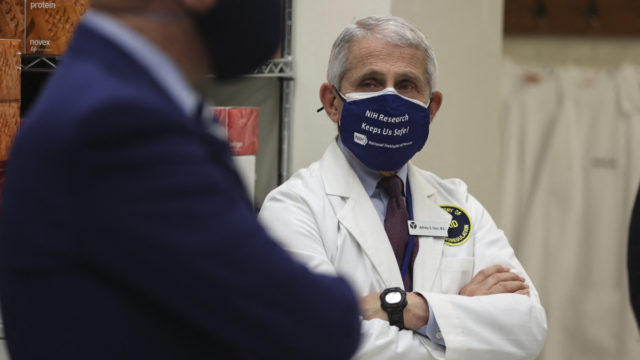 Americans may still need to wear masks in 2022 even as the country relaxes other restrictions to combat COVID-19, the nation’s top infections disease expert Dr Anthony Fauci says.

While daily infection rates are coming down dramatically, thousands of Americans still die every day from the virus, and less than 15 per cent of the US population has so far been vaccinated against it.

President Joe Biden is trying to accelerate the campaign to vaccinate most American adults as local governments clamour for more doses to prevent the deadly virus that has claimed nearly 500,000 lives in the US.

That is more than the country’s combined toll from both world wars and the Vietnam War.

Dr Fauci, Mr Biden’s top medical adviser,said on Sunday (local time) that the approaching tally was “a terribly historic milestone in the history of this country”.

“If you look at what has gone on now, and we’re still not out of it, a half a million deaths. It’s terrible. It is historic. We haven’t seen anything even close to this for well over a hundred years since the 1918 pandemic of influenza,” he told NBC’s Meet the Press.

“It’s something that is stunning when you look at the numbers, almost unbelievable, but it’s true.

Asked if Americans should expect to still be wearing masks into 2022, Dr Fauci said: “I think it is possible that that’s the case”.

He said it depended on the level of the virus in communities and potential virus variants.

“Obviously, I think we are going to have a significant degree of normality beyond the terrible burden that all of us have been through over the last year,” he said.

Dr Fauci also said it was too soon to pinpoint when the US might reach herd immunity.

“We want to get that baseline really, really, really low before we start thinking that we’re out of the woods,” he told NBC in another interview on Sunday.

He also addressed speculation that a single dose of the coronavirus vaccine might be enough to protect against the virus.

“We don’t know what the durability of a single dose is, and it really is risky, risky for lack of protection and risky to engender perhaps some variants,” he said.

But he said it could be different with “following infection”.

“The data look really quite impressive that if you’ve been infected and then you get a single dose, the boost that you get with that single dose is really enormous. So we’re looking very carefully about that,” he said.

The number of infections in the US has started to decline in recent weeks. Dr Fauci said that downward trend was positive but emphasised the need for vigilance.

“The slope of downward trajectory is really very good and very impressive,” he said.

“The one thing we don’t want to do is to be complacent that it’s coming down so sharply that now we’re out of the woods because we are still at a baseline of daily infection that’s quite troublesome.”